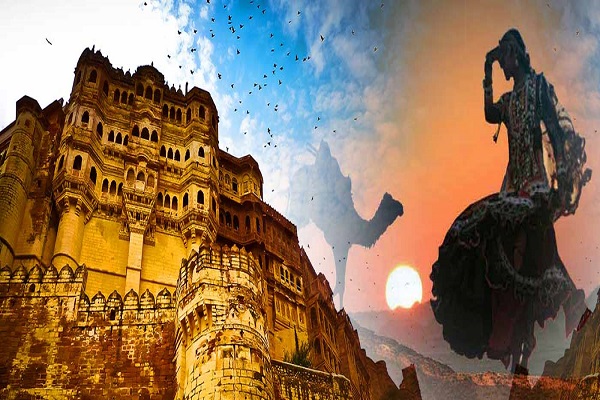 10 Best Places You Must Visit In Rajasthan

Teeming with forts and palaces and replete with deserts, golden sands, and historical forts, Rajasthan houses the royal ruins of India. Being one of the gigantic states of India, Rajasthan tops every individual’s bucket list that tends to explore the heritage history; thus considered to be among the best tourist destinations.

However, Rajasthan is packed with several beautiful destinations, sorting out the best places to visit among all might be a bit tricky. At this point, Rajasthan Tour Packages come to the rescue, which will make sure that you do not miss out on anything.

Follow our guide to the ten best places to visit in Rajasthan.

Udaipur – The City Of Lakes

Udaipur, the capital city of Mewar, boasts the existence of a significant number of lakes, keeping the panoramic views of forts and palaces in the background. Explore the Monsoon Palace, Kumbhalgarh Fort, and visit the Jagdish Temple and do not miss boating at Lake Pichola.

Ajmer is always regarded to be the holy city due to the presence of the sacred shrine of Dargah Sharif. Encircled by Aravali range and Nag Pathar Range, Ajmer rests amidst the golden Thar Desert. Do not miss attending the Qawaali on your visit to the Dargah, and offer a ‘chadar.’

Often known as the Blue City because of the blue house complexes, located near the Mehrangarh Fort, Jodhpur has got the charm of royalty. Due to the tropical weather of the site, it is often referred to as the ‘Sun City’ as well.

Bundi – The City Of Baoris

Though not one among the most popular cities of Rajasthan, it features the origin of the Unda Meena tribe. Apart from the historical significance, the city boasts its ancient architecture of the Baoris and royal forts.

Rajasthan has only one possessed hill station, Mount Abu. It is located at the border of Rajasthan and is surrounded by the Aravali range, which is regarded as the actual traveler’s paradise. Moreover, it has an excellent source of pilgrimage too.

It is considered to be one of the largest forts in the world because of the walls made up of yellow sandstone. Alongside, it also houses several Havelis and temples. The beautiful fort also gives you the scope to witness beautiful sunsets.

Pushkar – The City of Gods

Pushkar is considered to hold the holy shrine of Lord Brahma. Lord Brahma is regarded as the Creator of the Universe; Pushkar is held to be the most sacred of all places in Rajasthan. The annual camel fair organized here is of major attraction.

Located on the banks of the Berach River, Chittorgarh Fort holds the proof of early 7th-century architecture which belonged to the Mauryan dynasty. It also hosts statues of historical figures which is of great significance.

Sawai Madhopur – The City of Tigers

It is one of the most adventurous places for some wildlife lovers out there. Home to the Ranthambhore National Park, the UNESCO site aims at preserving the tigers. You can involve in bird watching and go for jungle safari.

To make your holiday a fun-filled experience, plan it with Footloose Holidays. With their extensive customer service experience and variety of tour packages, you can derive the ultimate trip satisfaction, without any pains.