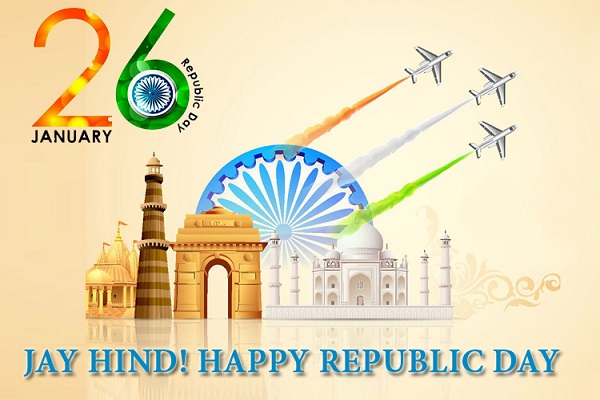 5 Places to Visit and Celebrate Your Love for India This Republic Day!

26th January is a moment of pride for all Indians. This day takes you through the swirling ride of sentiments that reassert and reinforce you as an Indian. Our sense of patriotism is on its highest virtue. And we want that feeling to be soaring high with our gestures bringing more power to the reason for which we observe Republic Day.

The spirit, fervor, and enthusiasm of Republic Day can be seen everywhere as you have tricolor furling, parade troops serving, nation-wide artists performing and dancing to the tunes of national pride.

People celebrate this day exchanging national vows and singing the national anthem at community centers, public parks or just at their homes, rejoicing the national festivity in their own different ways. But, did you ever thought of taking a tour to the places that have stood to the glorious events, proud sacrifices, and ennobling honor of the Indian Republic. There’s nothing as rejoicing as this on a Republic Day.

Here, we are picking 5 destinations that you should visit this Republic Day to experience the day’s grandeur at its best.

No talk of patriotism is complete without the mention of our capital city, New Delhi. The city exhibits the most prominent monuments and destinations of national importance, and India Gate is one of them. Situated amid the city, the place is historically attributed as a War Memorial that commemorates martyrs from World War I and Afghan Wars.

On the Republic Day, you will find it in its grandest depictions, as it serves to be the commencement point of the national parade. The Prime Minister of India does the starting ceremonial rituals and the President hoists the national flag. Post that, the National Anthem is played and 21-gun salute is given.

This is the time when you see the three forces coming together and demonstrating their strengths with warfare antics and armory on the Rajpath. Imagine being there and witnessing all this with the cultural performances from the groups representing different states and regions of the Republic of India.

Can you feel the goosebumps now!

Punjab is known to be a place that has been home to several brave hearts and has witnessed freedom movements. Jallianwala Bagh and Wagah Border are boldly linked to the heroic history of Punjab and certainly account for the must-visit places on a day of national interest.

Jallianwala Bagh is a memorial dedicated to martyrs of the infamous Baisakhi massacre. Being at the place, you can feel the fateful execution looking at the bulleted walls and memorial plaques. This place is going to throwback the sorrowful sacrifices made by the crusaders of independence and make you think about the struggle of our freedom.

Around 29 Km away from Jallianwala Bagh is Wagah Border, which is a prominent border area between Pakistan and India. It is known for its vigorous and rattling parades and army performances which are aimed at promoting harmony between the two nations. On a Republic Day, there’s no other place that can match the energy and zeal of this place as you see people turning up in large numbers and cheering the parades with the words of patriotism. Makes for a moment where you find the one-nation feeling at its peak.

Situated in the heart of Ahmedabad, it is the humbly preserved domicile of the Father of the Nation. Standing on the banks of Sabarmati River, this place is filled with the vibes of compassion, simplicity, and harmony instated by the inspiring texts, photographs, and belongings from the life of Mahatma Gandhi.

Here, you can submerge yourself into the original manuscripts, letters, and other pieces of writings in the library, giving you an idea of the era of independence and the life they led then. Take a look at the environs and the details of the life of him in the museum and the painting gallery. You can even see ashram activities and take walking tours to different attractions within the ashram like Magan Niwas, Upasana Mandir, Somnath Chattralaya, and Vinoba-Mira Kutir.

On this Republic Day, allow yourself the chance to be a part of the epitome of national harmony and see through the journey of independence through the lens of Mahatma Gandhi.

Located in the Gorakhpur District in UP, Chauri Chaura is a commemoration to the freedom army that had stood against the Britishers and laid their lives for the nation in the non-cooperation movement. The place preserves the tale of 4th Feb 1922, when independence protesters who clashed with the British police in the revolt were open fired. This tall memorial displays the name of the martyrs who laid their lives here. Forms an overwhelming sight for every Indian national. Visit the place and you will feel the vibes of sacrifice and patriotism everywhere.

Another prominent site in the row is ‘Rani Jhansi ka Qila’ situated in the city of Jhansi. The Indian history of independence laurels the bravery of Rani Laxmibai, who solely fought with the British troops and gave away her life to fight against the imperial rule. Taking a stride through the fort, you will be learning a lot about the glorious history of the place in detail. The fort’s museum offers a pictorial representation of the life and times of the Jhansi’s queen and various stories related to the pre-independence era. As you walk atop, you get a mesmerizing panoramic view of the local neighborhoods. All making for a never-before Republic Day experience.

Situated in Port Blair, Cellular Jail served as a colonial prison in the British era. Better known as Kala Pani, it represents the stories of severe wrath that our freedom fighters went through. The legendary freedom crusaders like Vinayak Damodar Savarkar, Yogendra Shukla, and Batukeshwar Dutt were imprisoned here and were tormented to death. The conditions in these jails were beyond a level to be even heard by the faint-hearted.

The jail is now converted into a museum that displays the notes of valor and sacrifice from the past era. A walk through the soil of this momentous place takes you through a ride of patriotic sentiments. On a Republic Day, people come here in large numbers and sing the National Anthem, to show gratitude and respect to the brave hearts who laid their lives to ensure us the life of freedom and dignity.

These places are about bringing you close to the real sentiments of nationalism. The ones that form the reason for us to celebrate the day that reasserts and binds us together as an Indian. Plan your visit to one of these places this Republic Day and feel the surge of patriotism like you did never before with Footloose Holidays!